So I've been doing the "pro-black" thing since 1990. I'd say 1989, but to be honest, it was 1990. That would be 29 years. I mention this because I was/am continuously annoyed at how once Obama became the Democratic nominee for president, a whole lotta people who back in the 1990s didn't want anything to do with that "black shit" or that "um-foo-foo shit" or that "kunta kinte shit" all of a sudden were "all black everything". On the other side were people who were equally "on that black shit" for years suddenly became OK with imperialism, global war against non-white people (ahem..Libya) and Obama could say and do no wrong, whereas previous presidents were the racist heads of the white supremacy system. In other words, the masses got fake "woke" and the previously "woke" went comatose. I bring this all up because recently Rep Hakeem Jeffries said that Trump was the Grand Wizard of the White House. This kind of hype speech has become all too common among the "fake woke" who, from their utterances haven't cracked a book on slavery or Jim Crow. This brought to mind a spoken word piece called "Bring Back Segregation" See there was a time when US presidents actually supported actual Klan rallies in DC: 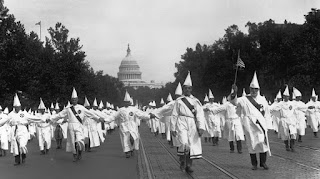 When you know this, regardless of what you think of Trump, it would not even cross your mind to think "Grand Wizard".

But this doesn't just apply to Jim Crow era references, it includes the common "Nazi" and Fascist" claims regularly made by the fake woke. They have no idea what Nazi Germany was like for its victims. They have no idea what it's like to have government agents running up in their homes to take them away for public pronouncements against "dear leader". If they did, these words would not fall out their mouths.

But today we live in a country where people live in extremes. If they are inconvenienced then it's a major disaster ("horrifying" or "terrifying" to use the terms of left type publications). So yeah, some people need to be time traveled back to when the situations were actually bad rather than complain about First World Butt Hurts.
Posted by sondjata at 9:33 AM