Lately cities and states with relatively large black populations have seen a spike in "19" cases. I do NOT have a racial breakdown of the cases so I am *hypothesizing* as to what *could* happen. As mentioned in an earlier post having co-morbidities greatly increases ones chance of dying from or with the virus. Those leading issues are : Cardiovascular disease
Hypertensions
Diabetes What racial group has the highest incidents of these diseases? Blacks. The video below discusses what these diseases all have in common So since we know that having metabolic syndrome greatly increases your chances of having severe reactions to "19", lets look at some data from NYC. 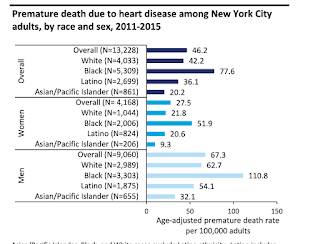 We can see that Black New Yorkers have the highest rates of heart disease deaths. Also in line with "19" statistics, black men are more likely to die of heart disease than black women. Lets look at diabetes (using Brooklyn data):

As we can see again, blacks way out rate whites in diagnosis, hospitalizations and deaths. It stands to reason that the high rates of CVD and Diabetes in the black community of NYC will play into higher death rates among Black people who get infected.
Posted by sondjata at 4:03 PM Links to this post

Get Your Vit C On

This isn't new to me but wanted to share with the readership as something they can do prior to getting sick. From the NYPost (but again, known for a while now):

Dr. Andrew G. Weber, a pulmonologist and critical-care specialist affiliated with two Northwell Health facilities on Long Island, said his intensive-care patients with the coronavirus immediately receive 1,500 milligrams of intravenous vitamin C. Identical amounts of the powerful antioxidant are then readministered three or four times a day, he said.

I'm not going to mention the product name because those in the know have already emptied the shelves of it around these parts, but there is a product on the market that has close to the 1500mg mentioned in the article. Should you not be able to procure the product there are other things you can do. Oranges, Limes, Lemons and Cranberry juice all have high levels of vitamin C. You can take these items on a regular basis as a way to make it harder for an infection to take hold. This is not just for the current pandemic. The "funny" thing about it is that a lot of the foods that provide this "medicine" are well stocked, even in the most mass hysteria panic buying emptied stores. And just to make sure I'm being responsible about this info. Mayo Clinic says:

For adults, the recommended daily amount for vitamin C is 65 to 90 milligrams (mg) a day, and the upper limit is 2,000 mg a day. Although too much dietary vitamin C is unlikely to be harmful, megadoses of vitamin C supplements might cause: Diarrhea
Nausea
Vomiting
Heartburn
Abdominal cramps
Headache
Insomnia

Posted by sondjata at 12:10 PM Links to this post

No. No math today. Just want to share one of the things I do when I go places where I expect to run into sick people, or where sick people are likely to run into me, Oil or Oregano. One of the things with the recent outbreak but is not limited to the recent outbreak is that some of these viruses and bacteria are airborne and so enter via the mouth or nose regardless of whether you put your hands in either location. Think about when you are walking down the street and someone with bad breath has passed and you go "damn". Now that person is long gone but there's that funk. Right. So oil of oregano is a known anti-viral : 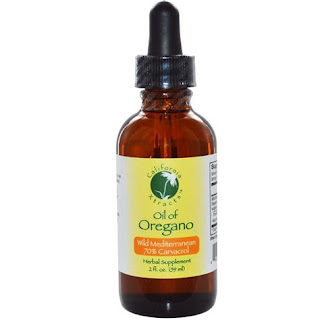 Filtering prevents airborne bacteria, viruses, other potentially disease-causing substances from entering the lungs, where they may cause infection. Filtering also eliminates smog and dust particles, which may clog the narrow air passages in the smallest bronchioles.

Just a warning though. Oil of Oregano is STRONG. You only need 3 drops max. You will feeeeeel it.
Posted by sondjata at 2:10 PM Links to this post

Recoveries As A Lagging Indicator?

So there is a website, worldmeters, that is keeping up to date info on Wuhan cases. First I noticed this: 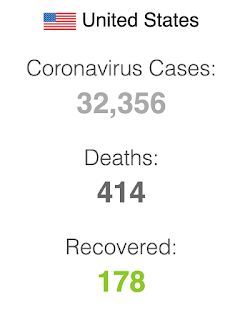 So many cases, so few recoveries. Then there is this:

So many "mild condition" cases but only 592 closed cases. I would think that you would have a far higher number of closed cases where "mild conditions" are either recovered or dead? No? Why not? Here's a sample of the per state data 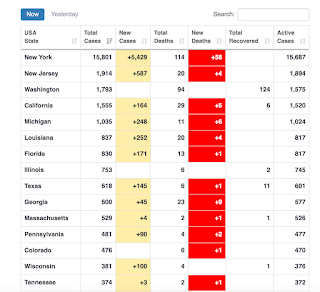 Again, where are the recoveries? It would seem to me that the mild cases are taking a while to clear up OR they aren't being reported. Assuming the former and not the latter, we should see either an enormous spike in deaths within the next week or an enormous spike in recovered outcomes. If we have the former then Wuhan would have a higher mortality than Ebola (40%). Of course it could matter who gets infected and dies, If the bell tolls for the elderly with other conditions rather than the population at large, then the Ebola comparison would be entirely incorrect. In either case, I think we should keep an eye out for the recovery numbers. "mild conditions" shouldn't become "dead" without passing through "severe" unless onset of severe symptoms is extremely rapid.
Posted by sondjata at 7:18 PM Links to this post 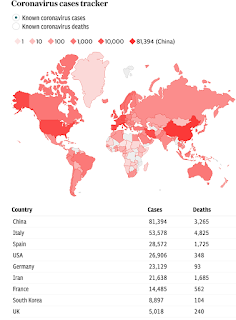 Variance has gone up 500k. SD has increased by 400 and mean by 300. These increases are within the margin of error. Most of the increases in deaths have come from Italy,Spain and Iran, with ~800,700 and 250 respectively.
Posted by sondjata at 10:11 AM Links to this post

[Updated 3-22-2020 8 AM] Medium has an excellent piece out. You'll see some of the data I have presented here in it. One of the closing messages:

Local governments and politicians are inflicting massive harm and disruption with little evidence to support their draconian edicts. Every local government is in a mimetic race to one-up each other in authoritarian city ordinances to show us who has more “abundance of caution”. Politicians are competing, not on more evidence or more COVID-19 cures but more caution. As unemployment rises and families feel unbearably burdened already, they feel pressure to “fix” the situation they created with even more radical and “creative” policy solutions. This only creates more problems and an even larger snowball effect. The first place to start is to stop killing the patient and focus on what works.

Yes sir. The responses have been "virtue signaling" writ large. [update] I wake up this morning to the article being pulled by Medium. Allegedly there are serious errors in the paper. I can't check because I didn't download the original (which goes back to my criticism of media changing and removing items from the internet). But I wanted to draw the reader's attention to one of the critiques: 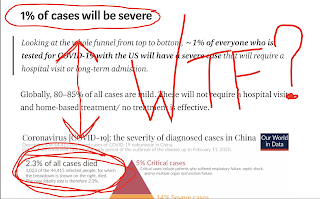 Do you see the problem with the critique? No? Yes? Alrighty then, the author stated in a headline:

1% of cases will be severe

The accompanying chart is headlined:

Coronavirus [COVID1-19]: The Severity of diagnosed cases in China

Since we cannot go back to the original article to get how the author got his 1% we don't know if that claim is supported by later data or extrapolation from current available data. However; as it stands, this particular critique is unfounded. Right on it's face. In my post about the math I gave the mean, sd, me and variance for the numbers as on that day. I showed that mathematically, China and Italy were/are statistical outliers. We should pay attention to them, but it is unlikely they will be the example of what to expect world wide. I put the variance on there so that the reader can know how bad it *could* get. Those numbers were for deaths rather than "severe cases" which is in dispute here. Per my "math" post, the US death rate is 1.5%. Not the 2.3% seen in China. Could it go up? variance says yes. Will it go up? Nobody knows. But here's the rub as I've pointed out earlier. If there are far more undiagnosed cases of Wuhan than we known (the known unknowns) then the actual case numbers skyrockets and the percentage of those with severe cases shrinks dramatically. Anyway it's too bad that the piece is unavailable. Now you can't read it. Now you can't follow the links in it to primary sources and you can't engage in the open debate. The gatekeepers have decided for you. For your own benefit of course.
Posted by sondjata at 1:54 PM Links to this post

The Telegraph posted an article on the ranges in infections and deaths for different countries. It contained the following chart (which of course will change after this posting): 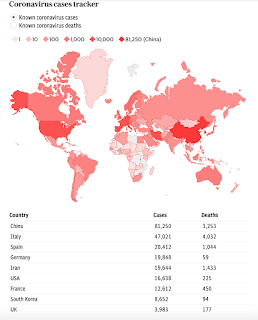 I did some math against these numbers and found the following: 1) The Mean is: 1116 deaths.
The Standard Deviation is: 1262
The Margin of Error is: 420.5
Variance: 1,592,094 As you can see only China and Italy has deaths above the mean and 2 Standard Deviations from the mean. Mathematically we would consider these two cases to be outlier data that is to be considered suspect. Similarly Germany and South Korea would be considered outliers even though they are well within 1SD of the mean. The math suggests that Spain, France and Iran may be the most likely outcome. Realize with a variance as high as 1.6 million we could still see "large" numbers of deaths. I put large in quotes because next to the world population of 7.8 billion, 1.6 million is not all that much. That may sound cold but that's the numbers. Other things of note in that article:

But there are other factors that may have contributed to Italy’s fatality rates, experts say. This includes a high rate of smoking and pollution - the majority of deaths have been in the northern region Lombardy region, which is notorious for poor air quality.

But Prof Ricciardi added that Italy’s death rate may also appear high because of how doctors record fatalities. “The way in which we code deaths in our country is very generous in the sense that all the people who die in hospitals with the coronavirus are deemed to be dying of the coronavirus. “On re-evaluation by the National Institute of Health, only 12 per cent of death certificates have shown a direct causality from coronavirus, while 88 per cent of patients who have died have at least one pre-morbidity - many had two or three,” he says.

Posted by sondjata at 3:26 PM Links to this post

Flu Comparisons Are Not Proper They Said

“It has a high degree of safety and is clearly effective in treatment,” Zhang told reporters on Tuesday. Patients who were given the medicine in Shenzhen turned negative for the virus after a median of four days after becoming positive, compared with a median of 11 days for those who were not treated with the drug, public broadcaster NHK said. In addition, X-rays confirmed improvements in lung condition in about 91% of the patients who were treated with favipiravir, compared to 62% or those without the drug. Fujifilm Toyama Chemical, which developed the drug – also known as Avigan – in 2014, has declined to comment on the claims.

Posted by sondjata at 11:18 AM Links to this post