In an age where black men with guns usually point and discharge them at each other, we ought to give respect for one of a few who knew how to properly use one. Robert Hicks of the Deacons for Defense the precursors to the Black Panther Party for Self Defense.

A Bogalusa Deacon pulled a pistol in broad daylight during a protest march in 1965 and put two bullets into a white man who had attacked him with his fists.

The new anti-illegal immigration law in Arizona has brought the usual suspects from both the right and the left. Much of what I've read, particularly from the left has been shrill and non-analytical. It's too bad because the Arizona law is a great opportunity for progressives and particularly black activists to bring up a host of issues that have been conveniently ignored. However; before I get into that let me lay out a few things:

It is, I believe, the height of hypocrisy for certain people on the left to discuss how opposition to illegal immigration is equal to being anti-immigrant. It is a totally false comparison, bad logic and is purposefully intellectually dishonest. Are there in fact persons who are anti-immigrant, particularly Mexican immigration. Absolutely. You want to point those persons out? Go right ahead. However the gross generalization that to be against illegal immigration is to be anti-immigrant is a false generalization and ought to be excised from left arguments

Furthermore on the point of hypocrisy, I doubt that any of the persons who apparently have no problem with persons entering the country via illegal means would be so happy if random persons simply entered their homes without their invitation and refused to leave and demanded a lease to stay there. So let's stop with the two-facedness on the subject.

Every country on the planet has some kind of immigration policy. Some tougher than others. Since we are focusing on Mexico let me tell you that they have pretty tough immigration laws there. Ask anyone from central America who's tried to reach the US via Mexico and gotten caught. So every and any country has the right to determine the legal means by which a non-citizen may enter and stay in the country.

Oh and there's my favorite: Undocumented immigrant. I love that one. It's like calling a trespasser on private property an "undocumented walker." They just didn't get around to getting the permission of the property owner to be on said property. Good luck using that argument in court. Dude I didn't steal the car. I just hadn't gotten the documents from the owner yet. So having covered that, again, lets get to the Arizona law and why it just may stand up to court scrutiny.


I was very interested in Obama's response to the passing of the Arizona law. He didn't come right out and call it profiling. I am certain that he discussed this with the AG. This morning I discovered why. A piece in the NY Times discussed the Federal law covering immigrants:

I am certain that most of the people who are against the Arizona law had no clue about the federal requirement of legal immigrants to carry their papers on them at all times. I didn't know this at all, but thinking back on it, all my immigrant family members, prior to them getting citizenship always carried their "green card". Now I know why. I believe this is why Obama spoke as he did on the subject. He knew (or had been informed just prior to) that Arizona law was a copy of federal law, except the Arizona law had "teeth". Since it is already a requirement of immigrants to walk with proof of documentation, the only thing left to argue about is the means by which Arizona has chosen to enforce immigration law.

What Arizona law enables their police to do is to stop people on "reasonable suspicion" of being an illegal immigrant. When I heard that I knew it sounded familiar. No I didn't have flashbacks to South Africa or Stars of David on German Jews. No I thought of present day NYC. It has been a habit (by which I mean official policy) of police in NYC to stop and frisk African-American men for years now. Just this last year 500,000 people have been stopped and frisked, including asking for ID, by the NYPD while they were going about their business. Channel 7 News has recently had exposes with both a whistleblower police officer and a citizen with a video camera, showing that the "reasonable suspicion" were things like "furtive movements" and the usual "driving the wrong kind of car: AKA: A 'rimmed up' car".

The police have searched these men and in 95% of the cases no contraband (drugs or weapons) are found. In some cases persons have been tricked into making incriminating statements or revealing that they had small amounts of weed on them.

All the time this has been going on, not too many people had shit to say. These black and brown men, citizens of the United States have been having their civil rights violated multiple times with the full knowledge of those in authority. As far as I know there hasn't been a campaign to enforce these individuals civil liberties as citizens to not be accosted by police. No presidential commentary. No mass protests. Not much of anything outside the circles that include this author.

The reasons given by the NYPD for this blatant violation of the rights of citizens:

"We're targeting high crime areas."
"We use 'quality of life' enforcement in order to keep a lid on crime."

Sound familiar? It is exactly the same reasoning we hear for the Arizona law. Illegal immigration is a crime. A federal one at that. So in order to combat this "crime" we will stop people "at random" or who exhibit "behavior or clothing associated with illegal immigration" as a means of preventing these crimes.

At this point, you the reader should see where I'm going with this. If courts are OK with stopping citizens across the country for stuff like "you made a lane change without your blinkers" or straight up "you look like you may have weed", then how is a court going to strike down a law that allows police in Arizona (or elsewhere) to stop those they believe to be aliens who may be in violation of immigration law? Certainly it cannot be argued that illegal immigrants are above being treated like the citizens are being treated in NYC.

So in a sense getting mad about Arizona is short sighted. There is a web of laws that are used to profile and harass citizens that go unchallenged that provide the legal precedent for the Arizona law. I'll give another example of why the Arizona law will probably withstand challenge.

in 2000 during the Puerto Rican day parade in NY some men got out of hand and sexually assaulted a number of women. There was a lot of press over this at the time. There was video of the incident and the police had determined that the perpetrators of this crime were African-American and Latino men. They decided that the best way to catch these men who appeared on tape, was to put police check points on every exit of the FDR below 23rd street on the following friday. I was headed to the Nuyorican Poets Cafe and had to exit at the 14th street exit (now closed) where I was told to pull over. All females were allowed to pass by. I was detained and asked to provide identification which was compared to the photos of the suspects. Had I committed a crime? No. Had I driven in a manner that broke any NYS motor vehicle laws? No. I was stopped and profiled simply because I was black and male. Period.

Similarly the legal argument Arizona will use to defend it's law is that illegal immigration is a crime. 90% of the suspects of this particular "crime" are Mexican. We are not "racially profiling" we are simply following good enforcement tactics by targeting those that "fit the data" which "includes race" but also takes into account "other signs".

By the time I get to Arizona 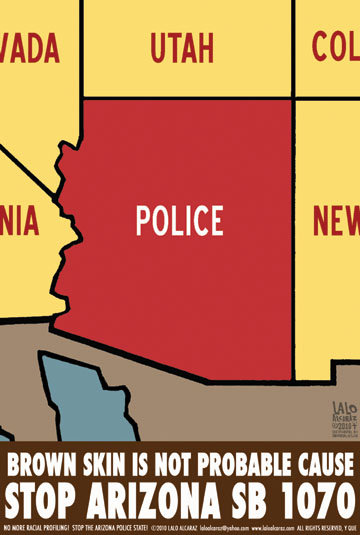 Planet Grenada:
Posted by sondjata at 10:32 AM

The Middle Class Game is Up

A fine quote from a good read in Alternet:

The guy in front of the flat screen in Cedar Rapids, Iowa doesn't even have to stop and think to draw the corpo-state approved conclusion Anderson delivers. It's instantaneous into his deep reptilian brain: "Hatians fucked. Iraqis fucked. Greeks fucked. Me live in best place of all."

Long ago I posted a piece showing that illegal immigration had a negative impact on American wages and argued that the job opportunities for blacks at the lower end of the employment scale were being negatively impacted. It was not a popular post but I provided evidence for it. Now we have more documentation on this issue.

The findings are published in the journal "Social Forces."
Professor Edward Shihadeh and Ph.D. Candidate Raymond Barranco conclude the arrival of large numbers of immigrant workers in an urban area displaces blacks from low-skill jobs. That, in turn, leads to an uptick in violence.

I will repeat the sentiments of the paper's author that this ought not be seen as an attack on immigrants legal or otherwise, but ewe should not allow patently false claims in regards to the impact on black communities go unchallenged.

A Queen in Nigeria

Hajiya had one wife-beating case early in her reign.

"I told him if he ever beat his wife again, I'd dissolve the marriage and put him in prison," she remembers. "Marriage is not a joke, and women are not slaves."

Since that case, she has made a point of campaigning against domestic violence whenever she holds court in local communities. She says she's never had another beating case. People know where she stands.

"Men sometimes say the women provoke them, so that is why they beat them," she says. "I tell them that there's no justification, whatever happens."

If a girl is miserable in an arranged marriage, the queen listens to her side of the story, even though she dislikes divorce.

"In such cases I try to strike a balance. I don't just end such marriages. I try to be tactful and see if there's any way this woman can come to love this man," she says. "But if that's not possible, if there's no way she can have any compassion for him or love, it's not her fault or his fault. It's just natural.

This passage reminds me of a conversation I had with a friend. We were discussing marriage and how (in her case in Islamic societies) marriage is more about an arrangement and "obligation" rather than some romanticized love relationship. Not that those marriages were/are without love, but that "love" as is understood in "the west" was not the centerpiece of the relationship.

Honestly I had thought of similarly themed commercials.

Dallas South Blog
Posted by sondjata at 9:39 AM

Japanese-African children in the Congo

For Hip Hop News & Entertainment at DimeWars.Com
Posted by sondjata at 6:40 PM