I Just Want My Corners

Earlier I wrote about The Wire and it's sub-plot regarding the gangsta that wont wise up. I expressed the idea that such a mentality is not the sole domain of drug dealers but of other situations that black people find themselves in. For example let's loo at Haiti. The NY Times posted an article entitled: Haiti's Political Vacuum Stokes Flames of Gang Violence which discuses the actions of gangs in Haiti in which "having corners" is more important than say, ohhh, rebuilding society.

quote:
Cité-Soleil, the poorest slum in the poorest country in the hemisphere, is split in two by a gang war. Ms. Max Civil and her husband had the misfortune to live near the dividing line between two sections of gang turf - their neighborhood, Boston, and another, Route 9. A gang leader known as Labanière controls Boston. Dread Wilmé's gang holds sway over Route 9.

Crossing into the Route 9 area, three young men appear on a broken-down moped so bristling with guns it looks like a two-wheeled armored personnel carrier, replete with an AK-47, a Glock 9 millimeter and a .38 Special. Though the two visitors were identified as journalists, the men came running at them, pointing their guns at the visitors' heads and screaming, "Why are you coming from Boston? What were you doing there? Are you spying on us?" One, with a Glock, mirrored sunglasses and a Los Angeles Lakers jersey, bounced off the ground like a pogo stick while keeping his gun trained on the visitors.

The interpreter begged them not to shoot until he had a chance to show them something. He produced from his wallet a picture of Mr. Aristide, one that he keeps for such an occasion.

The men were somewhat placated and calmed further as he dropped the names of Tupac and Billie, two Cité-Soleil gang leaders that he has known since they were children. The police took Billie from the hospital after he was shot in the gang war. Tupac was buried last week.

A new Mitsubishi S.U.V. drove up. Inside were three senior gunmen with eyes like stones. They stared for a moment, nodded and drove away. The gunman with the Glock switched to flawless English with a southern drawl.

He spent his teenage years in Miami and goes by the street name of Yamoska. "Over there," he said, pointing to Boston, "they were Lavalas too, but since Aristide is gone, they're our enemy."

Oh and the "corners" in dispute? 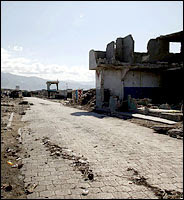 I mean are they serious? Are we serious. Devastation everywhere and these kids got mopeds, AK's and not one bag of cement to build something? Let's get something clear here: Money did not always exist, poverty did not always exist. Humans have been on the planet with far less than what we have now. There is absolutely no excuse for this kind of behaviour. None.