The Purpose of Foreign Trade

foreign trade and economic development have been used to concentrate economic power in the hands of dominant nations. What is really going on is covered up with do-good verbiage and formal models. In reality, trade and development are ways to colonize countries that think they are independent.

I believe brother Nkrumah called this "Neo-colonialism". from Counterpunch
Posted by sondjata at 2:18 PM Links to this post

‘Chains are for the slave who has just become a slave, who has… just been brought across the Atlantic,’ Boubacar said. ‘But the multigenerational slave, the slave descending from many generations, he is a slave even in his own head. ‘And he is totally submissive. He is ready to sacrifice himself, even for his master.

From the Daily Mail
Posted by sondjata at 10:29 AM Links to this post

It was reported that Mitt Romney offended Palestinians when he made yet another "Anglo-Saxon values" type of speech in Israel. Stating:

As you come here and you see the GDP per capita, for instance, in Israel which is about $21,000, and compare that with the GDP per capita just across the areas managed by the Palestinian Authority, which is more like $10,000 per capita, you notice such a dramatically stark difference in economic vitality,"... "And as I come here and I look out over this city and consider the accomplishments of the people of this nation, I recognize the power of at least culture and a few other things," Romney said, citing an innovative business climate, the Jewish history of thriving in difficult circumstances and the "hand of providence."

Ahh the "hand of providence" otherwise known as The White Man's Burden. Not that I expect much different from a Republican, but that isn't really a story. Why? Because it is actually the opinion of those in power in Israel.

Meanwhile on Sunday, Israeli daily Maariv published an interview with Interior Minister Eli Yishai, in which he stated that most of the "Muslims that arrive here do not even believe that this country belongs to us, to the white man."

So if this is the actual opinion of those in Israel and it is on the record then what has Saeb Erekat Been reading that had him make the following statement:

"It seems to me this man lacks information, knowledge, vision and understanding of this region and its people," Erekat added. "He also lacks knowledge about the Israelis themselves. I have not heard any Israeli official speak about cultural superiority."

There are a couple of possibilities. Number one is that he simply does not know of the statement. If he doesn't I would find that pretty shocking. It's not every day that government ministers go on record with some White Man's burden commentary. Surely those in charge of intelligence gathering in Palestine keep an eye out for such statements. The second possibility is that Saeb Erekat may consider himself "white". In which case he identifies the same way as the Israeli's as it pertains to the African migrants, the presence of whom was the subject of the linked quote. It would explain why he apparently missed the not too long ago statement made by an Israeli government minister.
Posted by sondjata at 8:14 AM Links to this post

Yesterday Negroes were esctatic that Obama made an executive order to "study" African-American education. I read the piece and noted that there were no, zero, zilch new monies directed at Black schools, school districts, teachers therein or anything of the sort.

Today the NY times reports that Obama signed a $70 million for the defense of the state of Israel.

No new money for African-americans. CITIZENS who are tax payers. But $70 million for Israel.

Who's the damn fool here?
Posted by sondjata at 12:25 PM Links to this post

So Mugabe Had it Right?

The NY Times on the results of the "land grabs" by Mugabe:

Before Zimbabwe’s government began the violent and chaotic seizure of white-owned farms in 2000, fewer than 2,000 farmers were growing tobacco, the country’s most lucrative crop, and most were white. Today, 60,000 farmers grow tobacco here, the vast majority of them black and many of them working small plots that were allotted to them in the land upheavals. Most had no tobacco farming experience yet managed to produce a hefty crop, rebounding from a low of 105 million pounds in 2008 to more than 330 million pounds this year. The success of these small-scale farmers has led some experts to reassess the legacy of Zimbabwe’s forced land redistribution, even as they condemn its violence and destruction. But amid that pain, tens of thousands of people got small farm plots under land reform, and in recent years many of these new farmers overcame early struggles to fare pretty well. With little choice but to work the land, the small-scale farmers have made a go of it, producing yields that do not match those of the white farmers whose land they were given, but are far from the disaster many anticipated, some analysts and scholars say.

So essentially, had the British lived up to their obligations to "compensate" white farmers so that the land resettlement could have gone peacefully there would have been a better outcome. However; because the British did not live up to their obligations and instead sought to demonize Mugabe, Mugabe lived up to his promises to *his* people and now after the forecasts of doom and gloom and all manner of "western" interference, the people are actually benefiting from the decision of one Robert Mugabe. And mind you this is just Tobacco.
Posted by sondjata at 8:15 AM Links to this post

From the San Diego Reader 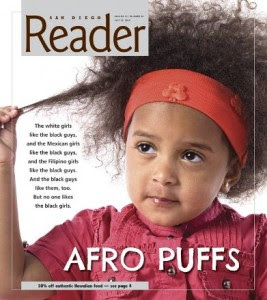 Do note that the picture they used is of a black child with clear European or other non-African ancestry. The purpose is not to nit pick at what "black" child is presented but you would think that if one is going to write a piece in which one discusses how people do not like black girls, one would put a black girl on the cover. Particularly one with "motherland" black hair that "naps up" into little beads when allowed to grow naturally. For those who don't know of what I speak of, see below:

You will note the texture of the hair. I know some o' y'all haven't seen such a thing up close and personal. [update] apparently the actual piece: http://www.sandiegoreader.com/news/2012/jul/11/cover-afro-puffs/ Is about something ENTIRELY different. Fell for the click bait. [/update]
Posted by sondjata at 4:36 PM Links to this post

From the NY Times this morning.

On Wednesday, a Kenyan oil official told Reuters that the country was canceling an agreement to import up to 80,000 barrels of oil a day from Iran after Britain warned Kenya that it could run afoul of the sanctions.

Exactly how does a former exploitative colonizer (is there any other type) have the gall to tell it's former victim whom they can do business with and what "sanctions" they are going to impose if they do? That's pure bullshit. Here I thought Kenya was an independent nation. An independent Kenya would have been able to tell Britain what cliff to jump off of and do business with whomever it pleased.
Posted by sondjata at 9:33 AM Links to this post