The NY Times has an opinion piece discussing the recent murder of the 4 Americans sailing near Somalia. As usual they are blaming the "pirates" for the "new violence." but the truth is actually far different. For those with short memories that one of Obama's early acts of president was to give the US Navy the go ahead to kill the pirates that had boarded a US vessel. Up to that point no act of piracy by the Somalis had involved actual killing. In fact as far as I've heard, up to that point the pirates were reported to have treated their captors well. As well as being a captive can be. I said then and I am proven now, that the decision would cause the Somalis to either enact revenge or step up to killing passengers themselves, particularly if they thought they would be caught like the one who was recently sentenced in NY.

The fact of the matter is that the US escalation to killing is why these four people are now dead and no amount of historical revisionism will change that fact.
Posted by sondjata at 3:01 PM Links to this post

Posted by sondjata at 5:02 PM Links to this post

Who's Coonin' for Who? 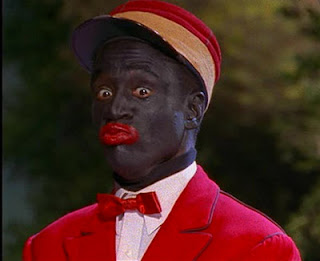 Chauncey DeVega, who appears regularly on Alternet posted a piece on Herman Cain, a Republican which was entitled "Black History Month is Herman Cain Playing the Race Minstrel for CPAC". In this piece, with an accompanying YouTube video DeVega purports that Cain was essentially a black man "showing out" for the benefit of white folk at the CPAC.

DeVega starts in early with the uncalled for insults; writing:

As you know, I find black garbage pail kids black conservatives fascinating not because of what they believe, but rather because of how they entertain and perform for their White Conservative masters.

I'm not above cheap shots myself, but I usually...no always have proof to back me up. Seriously, save the garbage pail kids commentary for certain entertainers *cough* method man *cough* who actually say stuff that denigrates black people. His positions that black conservatives simply act out for white folks is pretty insulting particularly when plenty of black folk on the left do the same thing.

DeVega goes into great lengths to inform the reader on the different faces of coonery and charges Cain with what DeVega considers the lowest of the low:

Herman Cain’s shtick is a version of race minstrelsy where he performs “authentic negritude” as wish fulfillment for White Conservative fantasies.

I'd like for you to keep this in mind because when we are done we will see that, though Cain indeed has some "odd" positions for a "black man", It is actually DeVega who is cooning...sorry minstrelling "authentic negritude" to the readers of Alternet (overwhelmingly white) in order to fulfill white LIBERAL fantasies on how black people ought to think, say and do.

DeVega presents his "evidence of minstrely" as follows:

Really? Right then. New Negro Law: No Negroes shall not enter a speaking engagement to any black music 'cause this is a sign of cooning. Check.

Then Cain feigns swimming after rolling up his sleeves to show them his black skin and how he is a hardworking negro (not like those other ones).

Really? that's what DeVega got from that? I didn't see it because I did not rewind the video to before the part that it was set for. Perhaps though he was showing that he's tough? Some machismo? Maybe? nahhhh...better to play the race card. Check.

Cain noted the "vernacular" of the speaker. Perhaps DeVega is ashamed that there are black people who have and continue to speak in a certain manner. I have certainly clowned a person or two over their manner of speech and writing, I've never said that they did it specifically to make a mockery of black folk or to affect the fantasies of white folk. Besides anyone who watches the speech in question will note that Cain showed a lot of respect for his family and was staying authentic to what specific advice he was given and how it was imparted. I suppose DeVega would have preferred that Cain be ashamed of his people and cleaned up the speech for the good, high brow white folk in the audience. Check.

New Negro Law: No Negro shall use anything but "standard" American English when making a presentation. Any use of African dialects is strictly forbidden and shall result in 30 lashes. This law shall henceforth be referred to as the 'Your name is Toby" law.

In the money shot, Cain gives the obligatory “black folks who are not Republicans are on the plantation” speech to the joyous applause of his White benefactors.

Now this may be the strongest argument DeVega has given. Personally I probably would not raise the plantation metaphor in such an audience. However; in black left circles the plantation metaphor is used regularly in reference to the Democratic party and African-American loyalty to it. Therefor for the sake of consistency I have to give Cain a pass to use the same phrase (which I suppose he got from the black left) where he pleases.

I suppose while DeVega was looking at the "Monkey in the window" (his words not mine) he missed one very important portion of Cain's speech which starts around min 16 of the linked video in which he had a disagreement with a caller to his radio show who was upset that Cain had raised a disagreement with president Obama:

Well sir I have two thoughts on that may be difficult for you to comprehend. But work with me. First It may surprise you and a lot of folk that some black people can think for themselves without having somebody else think for 'em.

I know that's a shockah.

And I said secondly sir. Secondly... and this one may be even mo' difficult for you to understand. When this nation reaches a point where it's citizens cannot constructively criticize it's leaders we are no longer a democratic republic we have become a nation of tyranny and that's not gonna happen on our watch.

It is our right... to disagree. So I had to add that to the list of me an Nigel: Shameless.

I cannot tell you the number of times I have had people run that "You can't criticize Obama" line past me. And how they don't care about x,y or z 'cause Obama is "our" president. Understand that I am an old school Pan-Africanist. I've seen what happened in countries where the first black president was given too much leeway because he was "first" and since he inherited so and such conditions and since the white folk did what they wanted then we should let this one do "whatever". You ALWAYS hold the leadership accountable to your interests and principles regardless of whether that leader came out of your camp or out of somebody elses. But that is besides the point here.

The point here is that DeVega insulted us, the black collective, by using insulting language in reference to a black political opponent particularly on a white owned internet property. By doing so he did exactly what it was he was charging Cain of doing. It was unnecessary and unfounded by the video. Alternet ran that piece because, in my opinion, DeVega fit the "minstrel" requirements for white liberals. After all DeVega is a "Respectable Negro" is he not?

Mind you this isn't a defense of black conservatives or even a specific defense of Cain's positions. The charges leveled by DeVega simply are not supported by the evidence provided. Therefore he was wrong to publish the piece. Wrong is wrong regardless of which end of the political spectrum it comes from. and to quote Cain's pappy:

I does not care what DeVega thinks of that charge.
Posted by sondjata at 8:33 AM Links to this post

" A man should be threatening. Particularly to his enemies"

Real Talk.
Posted by sondjata at 3:18 PM Links to this post

Posted by sondjata at 8:59 AM Links to this post