No, I didn't watch the debates. Since I have paid attention to what the various candidates have had to say since 2016 there was nothing they would be saying that I didn't know: 1) Open borders while denying they are for it.
2) Orange Man Bad
3) Medicare for all (a concept I'm not altogether opposed to.
4) Orange Man Bad.
5) Tax "the rich" (to pay for healthcare for illegal aliens to boot).
6) Men dressed as women, or who think they are women ARE REAL WOMEN.
7) Orange Man Bad. So knowing this, I didn't see the point. However; I don't share the analysis of various outlets that Democrats are doomed because they have gone so far left. Maybe...MAYYYBE, on this election. But the long term trends suggest that the past couple of contests have been tests of the demographic changes in America. If they are correct, the Democrats will not need to "go to the middle" to win national elections. So lets look at why I believe this. Here's the electoral map of the 2016 election 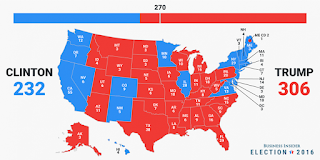 So you see that Trump won the electoral college vote by winning most of the south and mid-west. Now lets look at the county results: 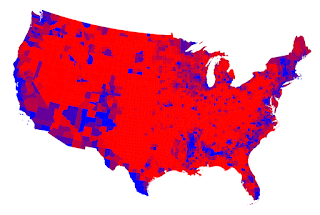 Yes, there is a lot of red there. But most important is where the blue is. Notice that the places where there are major cities or college towns are blue. Why is that important? Here's the population density map from 2016. 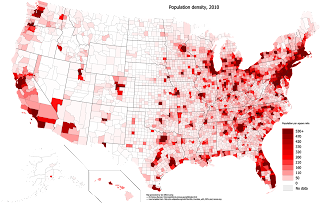 Do you see it? Yes. Democrats win where there are large populations. Republicans win in places with low population density AKA: farmland. Now when you have a party that has been practicing importation of a new electorate by both legal and illegal immigration, you understand that Democrats only need to flip a few of the red counties in various states to win. Every year, the white population, which makes up most of the Republican base, shrinks. The replacement population, where it exists tends to be non-white and to prefer Democrats to Republicans by upwards of 75%. Add to this the looming "compact" of states who are willing to disenfranchise their citizens and deliver their electoral college votes to whichever candidate has more popular votes and the Republican party along with us moderates are screwed (yes I test moderate thank you very much). The way I see it, the fact that open socialists are winning elections in America tells you all you need to know about the pendulum. Stuff that was political suicide a mere 10-15 years ago has gone mainstream. There will also be intimidation tactics. Recall that we have large financial institutions refusing to do business with people and businesses based on whether their political views align with the left. Expect more collusion among arms of the Left to intimidate the [relatively] easy to intimidate by social and economic means. So even if Trump manages to win in 2020 (not a foregone conclusion imo), You have 8 years of new voters graduating from HS indoctrination camps. 22 year olds graduating from institutions of higher indoctrination, Children of illegal immigrants coming of age along with their amnestied peers. Along with that you'll have 8 years of old heads dying off. All that to say that the Dem debate wasn't for moderates or general election Republicans. Trump won in 2016 by a slim margin on 3 mid-western states. Very slim margins. If he loses any one of the larger states he's done for. If not 2024 Florida and Texas is going to be very different than 2016 Florida and Texas. So maybe the Dem debates were not the disaster some people think it is.
Posted by sondjata at 6:13 PM